Add to Bag
Adding to basket

Live your life low with the latest collection of Lowlife belts, clothing and accessories now available from AltSkate. Influenced by all aspects of alternative lifestyles, Lowlife have brought the waistline to the forefront of fashion with their concise range of belts that combine creative pop culture with a rock‘n’roll attitude.

The Triple S belt features three rows of royal blue studs over a textured blue leather band. It is finished with a tidy little Lowlife logo stud at the point end and an embosed Lowlife lightening bolt on the loop. .

The Triple S belt is one of many awesome Lowlife belt designs available from AltSkate. 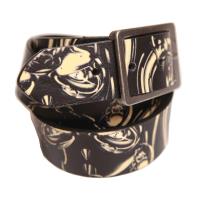